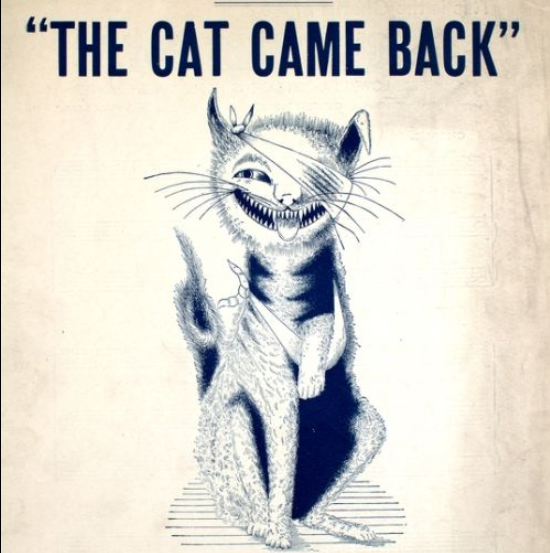 Do you know the old song, The Cat Came Back? Written by Harry S. Miller, Christmas 1893.

I remember it as an old recording sung by a man with a deep voice and it was very haunting. People who went up in balloons never to be seen again. People exploding in mines in thousands of pieces, but the cat came back. It was one of those scary things you just seem to want more of, maybe to find out more, maybe to hear about survivors.

Turns out there are a lot of versions of the song. A lot of differences in the words. It’s a song anyone can add more verses to, because that’s how it has grown. I have found a good selection, some I remember from long ago and some new to me. You could (should) write more. Add to the legend of the cat that kept coming back.

Here are some of those I found, to inspire you:

Now, old Mr. Johnson had troubles of his own.
He had a yellow cat that wouldn’t leave his home!
A special plan with deception as the key.
One little cat—how hard could it be?

Old Mr. Johnson had trouble all his own
He had a yellow cat that wouldn’t leave his home
He tried in every way to keep that cat away
Took him up to Canada and told him for to stay.

Now the man around the corner swore he’d kill the cat on sight
He loaded up his shotgun with nails and dynamites
He waited and he waited for the cat to come around
Ninety-seven pieces of the man is all they found.

Gave it to man going up in a balloon
Told him for to take it to the man on the Moon
The balloon came down about 90 miles away
Where he is now, I dare not say.

They gave it to a man going way out west
Told him for to take it to the one he loved the best
First, the train hit the curve, then it jumped the rail
Not a soul was left behind to tell the gruesome tale.

Away across the ocean he did send the cat at last
Vessel out alone today taking water fast
People all began to pray the boat began to toss
A great big gust of wind came by and every soul was lost.

On a telephone wire birds were sitting in a bunch
Saw them up there & said he’d have ’em for his lunch
Climbed softly up the pole until he reached the top
Put his foot upon the wire & it gave him quite a shock.

At last they found a way this cat to really fix
They put him in an orange crate on highway 66
Come a ten ton truck with a twenty ton load
Scattered pieces of that orange crate miles down the road.

So I put him in a box and I tied it up quite well.
I had some fellows help me and I paid them not to tell.
We put it in a boxcar, the west-bound 7:10
The train pulled away and was never seen again.

So I took him to the harbour and I put in on a ship.
I bid him bon voyage! for that oceanic trip!
The captain was obligin’ and glad to help us out
Tied him to the anchor so that there could be no doubt!

Some have an ending verse, like this. In some the cat lives and in others it doesn’t.

So Old Mr. Johnson’s story unfolds,
A tale about a cat and the story is old.
The reason why the cat just couldn’t stay away
There were seven little kittens meowing in the hay, so.

My Verses (not as haunting as I’d like, something to work on)

Tied the cat to a brick
thought that would do the trick
Threw it down an old dry well
The story he did not tell.