Television isn’t obsolete yet, but I wonder if the future will still have so many television sets. It is so odd that people still buy huge screens for television while looking at tiny phone screens most of the day.

I tried finding a TV in the smaller size, the size that would fit the space I have on my shelf. I could not find anything new for 19 inches. All the sets were either tiny with the idea of being mobile, or huge with the idea of… I don’t know what, taking up a lot of space?

Its kind of sad, we don’t even call them television sets any longer. When I think of a television set I do think of the old ones, with wooden frames and stands. Not the new plastic televisions which are stuck to walls. They look like really huge bugs climbing up the wall. What would aliens or people far in the future think of our televisions and the set up for watching them. I’ve read that it would look like we worship television, to anyone who didn’t know what it was. But, we kind of do worship television, the media. So it isn’t so far fetched.

Also, the trend to streaming and cutting cable service. Watching from streaming devices, other than television sets. Where will all of this leave the television set? Taking up space in the landfill. Not much of our plastic is recyclable yet. It is a shame we left behind the old sets, just change the electronics. But, I guess people find it easier to just buy more plastic. Most younger people may have never seen an old television, before plastic technology. Most would not know how to turn it on, without a remote control.

My Grandparents thought TV was turning our brains to mush. Maybe they were right, but not in the way they expected. 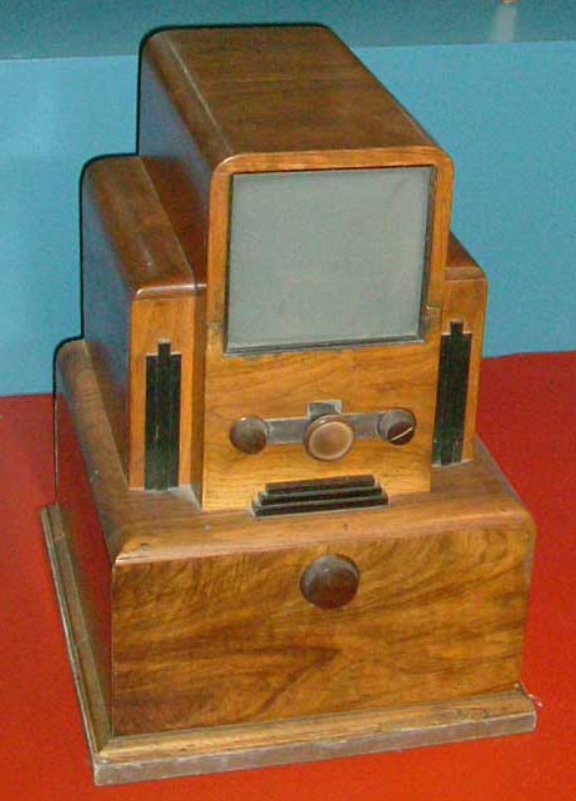 This set was made by engineer J. Alphonse Ouimet (1930). He was a Canadian television pioneer and president of the he Canadian Broadcasting Corporation (CBC) from 1958 to 1967.

Image from – The Early Television Foundation and Museum

Early television museum located in Ohio, US. But, many photos in the online gallery: mechanical TV sets from the 1920s, early electronic televisions, postwar, and early colour TVs. They also restore and rebuild old televisions.