Did Your Grandmother Have Dolls in her Bathroom?

I remember these from my Grandmother’s house, in the bathroom. She knitted her own from patterns that have disappeared along with most of her stuff after her death years ago. I don’t know how to knit (I learned to crochet on my own) but it would have been nice to have some of her old knitting patterns. Sometimes I see interesting or unusual patterns in the thrift store but I don’t buy them. I don’t knit after all. 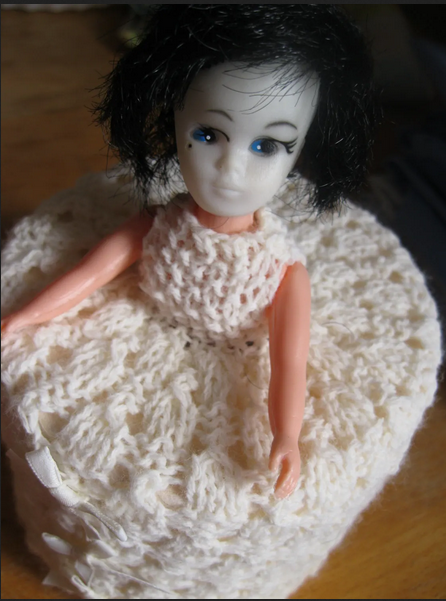 The History of the Toilet Roll Dolly

There isn’t a lot of history to the dolls. In the 1960’s they began appearing in North America and likely various Common Wealth and European locations too. I can only vouch for those I saw in Canada, mainly Ontario.

I expect the idea came along when there was extra yarn, some time for a new project, maybe a broken doll and the idea was born. Pretty up your bathroom. In the 1960’s there were other home made fashions in the bathroom. I can think of toilet seat covers, something I haven’t seen a big return on with all the vintage and retro ideas. You could co-ordinate your doll’s dress with your pretty toilet seat cover, the bathroom floor rug and anything else already decorating the bathroom. Maybe that was how she really got started. Not only could you add more home made crafts, more colour and keep that broken doll around for a reason but you could … make it all shades of pink matching.

There was likely some idea about modestly hiding that unsightly naked toilet roll too.

Specifications for Making Your Own Toilet Roll Doll Cosie

I have yet to see a vintage pattern for those old toilet roll cover dolls. That’s how I started writing about them today. I’m seeing what I can turn up online.

I can find an endless supply of the little dolls at thrift stores. They are abandoned by children everywhere, so it would be a good way to recycle/ repurpose some of them. You can pick and choose from weird blue hair colour to a weird blue skin colour and the standard human shades of brown colours too.

The only thing that matters about the doll is her height and width. She can’t stand too tall and tip over inside the toilet roll. She also needs to be the right width to fit through the centre of the cardboard roll from about the waist down. Mainly her legs need to be inside the roll as the skirt of her dress covers the toilet paper roll – that leaves her above the roll from the waist up.

The last pattern is an update on the vintage dolls. This one can be made with children, from paper and crayons. Simple and faster for those who don’t want to buy one.

\What do you Call your Toilet Roll Doll?

I guess you could properly call them toilet roll cosies, or toilet roll toppers too. I never found out what my Grandmother actually called hers. I always enjoyed seeing them though. She never made one for me, that I can remember. Maybe she just thought they weren’t really anything special. But, they were.

If you haven’t had enough toilet roll dolls yet…

YouTube – The Toilet Roll Dolls Help Themselves to Chocolate

This site uses cookies to provide the best possible user experience. If you continue we will assume you accept this.OK