I buy at least one poppy pin from the Canadian Legion boxes or the people standing at the door of the grocery store, every year. I like the pin itself and I like supporting the Legion. The real problem is keeping the pins on. Also, not getting stuck by that long pin several times a day.

The solution I have found for both of those is to remove the long, bent pin and replace it with another pin, not from the sewing box but the jewellery box. I have been using a pin I got from an event in my town. It has the name and logo of the city I live in. Another idea is to put something on the end of the long pin to keep it from pricking you. But, this doesn’t seem to work as well as taking the pin out and changing it for the short pin.

But, the Legion would prefer people wear the poppy correctly and remember the purpose it was intended for, both of them (fallen soldiers and helping the Legion financially).

So someone (probably more than one by now) came up with the idea of poppy centres. A pin which looks just like the original black centre of the poppy pin. A great idea! You can buy them online, but there will be a lot of orders as November gets close so order ahead.

You can also make your own poppy centre with a little glue and a blank pin from a craft supplies store or one of your own which you don’t mind to cover with the black felt poppy centre (the one that comes with the poppy pin) and some glue. Instructables shows how they re-make the poppy pin centre this way. It’s a great idea, simple and easy to do.

In 1915,  John McCrae, a doctor serving with the Canadian Forces Artillery, wrote his famous poem, In Flanders Fields. Inspired by McCrae’s poem, Moina Michael, an American professor and humanitarian, pledged to wear the flower year round. Anne Guérin, of France,  began to sell handmade cloth poppies for people to wear. She donated money from the sales to help people after the war. 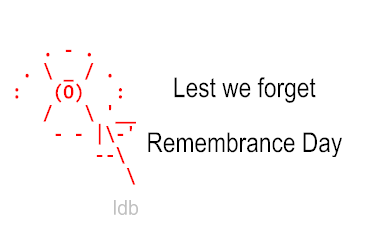 A poppy should be worn on the left side of your body, just over your heart.

The poppy came to Canada as a symbol of remembrance in 1921.

Traditionally, the poppy should not be worn after November 11th. They were meant to be left at the graveside after the ceremony, the moment of silence, on November 11th, at 11:00 AM.

The period of Remembrance is from the last Friday in October until November 11. So you could begin wearing a poppy in October.

If you find a fallen poppy, pick it up. The pins should be worn and disposed of respectfully. I keep mine pinned to a curtain. I don’t like throwing them away and they look pretty in a group. I add more to the curtain every year.

The centre of the poppy pin was originally black, but changed to green in the 1980s (which I remember them being). The poppy centre went back to black again in 2002 because the original flowers in France were/ are red with black centres. The green centre was to represent the green fields in France.

There is a campaign, from the Peace Pledge Union, for a white poppy. The white is said to include everyone who suffered during war, the families, civilians, and soldiers. You may see purple poppy pins which represent service animals lost in war.

Take a look at the Poppy Store online, to support our Canadian Legion all year round.

Royal British Legion – In the UK they have a different, paper, poppy pin.