Skip to content
Would you even guess this is a mousetrap? It’s vintage, from the 1930’s approximately. I first saw it on a video from Shawn Woods and then I went looking on eBay out of curiousity. Shawn Woods makes videos of how mousetraps actually work at catching mice. If you are especially squeamish or strongly against killing rodents, don’t watch. 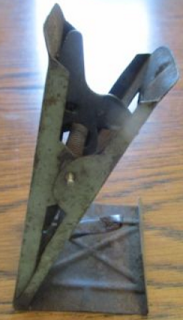 I think people have been trying to catch rodents, mice in particular, from the earliest days of deliberately planting anything with the idea of farming. You might think we should let all the urban wildlife live and, I’m not out to kill them all, but I do think we need to find some balance. Some animals are very good at surviving, adapting and scavenging. I’d rather see other animals keep their foothold instead of the planet being overrun by predatory scavengers. (I do include ourselves among those).
I enjoyed watching the mousetrap videos for the engineering aspects really. My Father was an electrical engineer and I also like seeing the mechanics of things and how all the little parts work together and rely on each other. Vintage things especially because they were still made to last then. I like the heavy, solid feel of them and 100 years later they made need a little cleaning up but will still work. Often any repairs are simple enough you can manage yourself.
I like to imagine the mousetraps people would come up with if there were an end of the world, a zombie apocalypse, a worldwide disaster, or some other possibility like the end of all fossil fuels. Could you make a mousetrap if you had to design and build it yourself? Don’t go with the “let all creatures live” thing. If it came down to the mouse or yourself for the last of the food you have on hand, I don’t think you would feel quite so charitable about sharing with a pack of rodents.